I’m a big fan of listening to books on my iPod, especially when driving or exercising. I’ve been a customer of Audible.com for years though the iTunes store. Recently they’ve ramped up their library and came out with some awesome promotions. I immediately jumped on the $7.49 Gold membership (for the first 3 months, then goes to $14.95) which gives you one book download every month. I think it’s a great deal which is why I’ve peppered the site with Audible.com banners.

In minutes the book was downloaded and it my iTunes (had to install their download software): 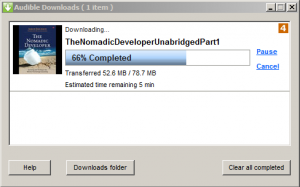 It gets interesting. In the ITunes screenshot, you’ll notice another book, Free by Chris Anderson (famed author of The Long Tail). That was the first book I downloaded after signing up. However, for some reason my account was not debited to download this title. I noticed the price is $0.00 for the unabridged version, but the abridged version goes for $18.99. I thought maybe I downloaded a sample of the book or something that was mislabeled. Nope. It’s the real deal, got it loaded on my iPod and listed to the first chapter already!